Today, the Texas Faith Network, an affilitate of the Austin liberal group, Texas Freedom Network, had a press conference at the Texas Capitol.

Get this-the small clergy group chose to have their presser at the government-owned, state Capitol building, while demanding that the SBOE adopt an ACLU-endorsed, strict “wall of separation of church and state” amendment to the current social studies standards, when talking about the first amendment.

The concept of strict separation that they want, would have banned them from having their event and speaking today at the Capitol. 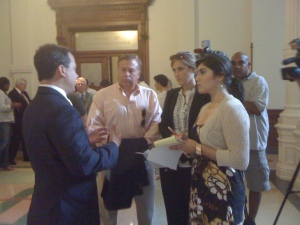 Their version of this concept would have been rejected by the Founders.  The problem for them is, their amendment langauge says this is what the Founders believed.  Untrue and factually and historically inaccurate.

It gets worse though, they used this time as an opporunity to personally attack the Christian faith of some State Board of Education members.

One clergy member even slammed his hand down on the podium to make his point.  It is obvious how desperate these groups continue to be, as the volume on their message seems to get louder every day, as we get closer the May 19th hearing and final vote on May 21st, for Texas social studies.

I am sure it hurts that now Texas State Historian, Professor Jesus de la Teja has come out to say that women, minorities, and religion are all covered fairly in the social studies standards.  See previous blog entry below for details on this. https://texaslegislativeupdate.wordpress.com/2010/05/03/texas-professorhistorian-thomas-jefferson-cesar-chavez-in-sboe-approved-social-studies-women-minorities-religion-covered-fairly/

Thankfully, we were there to cut through the political spin and give the media the truth about this issue.

This entry was posted on Wednesday, May 12th, 2010 at 6:31 AM and is filed under Update. You can follow any responses to this entry through the RSS 2.0 feed. You can leave a response, or trackback from your own site.