Helping spread the pro-life message has never been easier as the Texas Choose Life specialty license plate is now available to order online and at each county vehicle registration site around the state.  The plates are $30 annually, with $22 of the $30 going to qualified organizations that provide counseling and material assistance to pregnant women considering placing their unborn children for adoption, including pregnancy resource centers.  Liberty Institute helped lead the coalition of pro-life and pro-family organizations at the Texas Capitol that have pushed for several sessions to create the Choose Life plates and was thrilled to see the Choose Life bill finally pass this most recent Texas Legislative session earlier this year.   Thanks again to Senator John Carona and Representative Larry Phillips for championing such important legislation in 2011!

Be sure to let us know if you order one! For more details and to order the Choose Life plates, visit the Texas DMV website.

Today, Governor Perry signed the Choose Life License Plate Bill into law.  The law creates a specialty license plate with the message “Choose Life” with the profits from selling the plate going to support abortion alternatives.  Special thanks to all the members that supported this bill, including Representative Larry Phillips (pictured above) and Senator John Carona who carried the bill in the House and Senate respectively.

After hours of debate yesterday, the Texas House will vote TODAY on HJR 135, the constitutional amendment affirming religious freedom!

Please call your Texas House member today and ask him or her to follow Rep. Larry Phillips, the author of the bill, and vote for HJR 135! Please make sure your Representative votes for this important bill!

Visit our blog for updates throughout the day.

Choose Life bill Up For Debate and Vote

Numerous amendments being attempted by Democrats. They are being voted down.

Here is the statement we released yesterday.

The hearing was officially posted as a public hearing, but Committee Chair Chuck Hopson (appointed by Straus) announced that he would close the hearing and ultimately only allowed the public to hear ten minutes of committee discussions that lasted more than three house behind closed doors.

“It is outrageous that the public and media were effectively shut out from hearing important details about alleged threats related to the Texas Speaker of the House race made by an elected official and member of the Straus leadership team. “

“With Rep. Hopson’s anti-free speech letter last week and his near-shutout of the public today, the chairman appears dead set on hiding relevant information from Texas voters about speaker politics.”

The Choose Life License plate bill, HB 109 (Larry Phillips, Sherman-R) now has the support of 81 of the 150 Texas House members.  Rep. Larry Phillips has been extremely successful at gaining support for this pro-life legislation.  Sen. John Carona is our Senate author, SB 1098.  As you’ll recall, Free Market Foundation is one of the main groups working closely with Rep. Phillips to help pass this important legislation.  We are working with Alison Morales, who has an incredible personal story of adoption as an alternative to abortion.  Click here for more information and to see Gov. Perry’s support of this bill <http://freemarketblog.wordpress.com/2008/12/22/free-market-at-governor%e2%80%99s-press-conference-for-pro-life-bill/ Stay tuned for updates on this bill as the next step is a hearing before the House Transportation Committee. 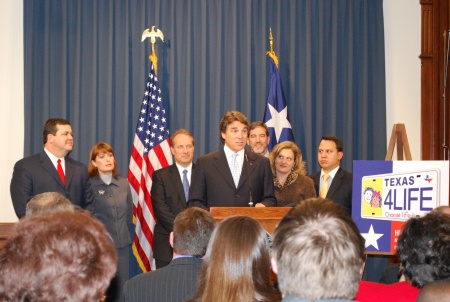