Last night, I, Jonathan Saenz, was honored to be invited to be a panelist at the Dell Jewish Community Center in North West Austin.

By the way, Michael Dell is included in the Social Standards.  Admit it, you haven’t read that anywhere else but this blog.

I must say, this is a beautiful facility and made up of several buildings with different uses and function.  I am glad to see religious liberty alive and well in Austin.

Also on the panel were Abby Rappaport of the Texas Tribune blog/online new source, and Kathy Miller, of the liberal group, Texas Freedom Network. 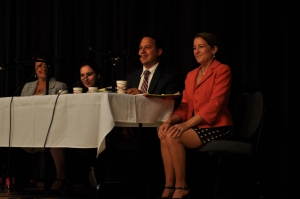 It was a very interesting debate and discussion.  We were excited to hand out our Just State The Facts (www.juststatethefacts.com ) document to the 30-40 people who attended.  I think as more people actually see the real facts of the contents of the Texas social studies standards, they will grow in their confidence of the strength of such standards.

In regards to this event being at the Jewish Community Center, it relevant to note that adopted Texas Social Studies standards cover: Rosh Hashanah, Yom Kippur,  Jonas Salk, Albert Einstein, Golda Meir, and many sections discuss the Holocaust.

Saved from elimination were Jonas Salk, who created the polio vaccine; Albert Einstein, and Rosh Hashanah.  An unelected review committee, made up of a small group of teachers, recommended eliminating  these people and this significant Jewish religious observance.   Thankfully, the elected members of the State Board of Education rejected these recommendations by these certain teachers, and voted to keep these important people and event in the Texas Social Studies standards.

It is worth noting that during the discussion last night, Kathy Miller seemed very excited to make a reference to Neil Armstrong being recommended for removal by one expert reviewer, Peter Marshall, who it seems Miller believes is a conservative.

That may be true, but Professor Jesus de la Teja, another expert reviewer also recommended eliminating Neil Armstrong from the social studies standards as well.  De la Teja was nominated by Democrats on the State Board of Education.    I am not sure the point that she was trying to make, with mentioning Marshall’s push to remove Armstrong, but not telling the rest of the story, that De la Teja also suggested removing Armstrong.  So two “experts” wanted Armstrong out, and not one.

Our point was, aren’t we glad the State Board of Education didn’t side with some of the “experts” on this issue?

Abby Rappaport, the moderator was fair, I must say.  Kathy Miller didn’t seem to like this fairness as she debated and argued with Abby a few times when Abby’s view of certain issues didn’t quite line up with Kathy’s.

Click here for link to update social studies standards released last week as voted on and approved, 10-5 (10 Republicans v. 5 Democrats), by the Texas State Board of Education. http://www.tea.state.tx.us/index2.aspx?id=3643

Click here to see what the Houston Chronicle’s “Sci-Guy” has to say about removing Neil Armstrong.  http://blogs.chron.com/sciguy/archives/2009/09/neil_armstrong_isnt_worthy_of_texas_textbooks.html

Even Burnt Orange Report thinks removing Neil Armstrong is outrageous.  Excerpt from Burnt orange report article.”Why? Because apparently, the first man to walk on the moon isn’t … wait for it… a scientist. So though he’s perhaps history’s most famous spaceman, and though NASA’s home in Houston has been a huge boon to Texas, we’d better wipe him out of the history books. Except for one key detail: Armstrong actually is a scientist. SciGuy points out that Armstrong received aerospace engineering degrees from Purdue and USC, and taught science at the University of Cincinnati. Sounds like a scientist to me.”

Austin, Texas-Last week, the Texas State Board of Education released its updated social studies standards as voted on in its last meeting.  After review, Liberty Institute released the following statement: “Liberty Institute applauds the State Board of Education (SBOE) for their hard work and strong dedication to the students of Texas, and especially for maintaining the integrity and timetable of the curriculum standards review process, which includes five public hearings and over a year of work that began in early 2009 and will conclude in May 2010 with a final public hearing and final vote”, said Jonathan Saenz, Director of Legislative Affairs, Liberty Institute.

“We are, however, concerned that a small vocal minority is now pressuring the SBOE to throw out these standards and begin the process anew to push a political agenda.”

” The public deserves to know that it was an unelected review panel (made up mostly of teacher-educrats), and not SBOE members, who tried to remove Christmas, the Liberty Bell, Daniel Boone, Albert Einstein, George Patton,  and others from the standards and Independence Day and Thomas Edison were to be diminished, when this process began in 2009.”  This is the type of review committee that the opposition now wants to send the social studies standards back to, and start over.

“  The public also should know that it was a Texas professor, Jesus F. de la Teja, who proposed removing Alexander Graham Bell and Neil Armstrong completely and Columbus partially, from the social studies standards, while asking for the National Organization of Women (NOW) to be added.  This is surely not the common sense direction to go for the education of our children.  Thankfully, the SBOE has corrected the missteps of others, “, said Saenz.  Professor de la Teja criticized the SBOE at a Mexican American Legislative Caucus press conference, last month.

EMAIL US AT: legislative@libertyinstitute.org if you want to testify at the May 19th State Board of Education hearing in Austin.  We can help prepare you for this meeting

Christmas out, Diwali in for Texas Social Studies

See details/press release below.  Media is already picking up on this story. http://www.kbmt12.com/news/state/59048292.html