Rep. Van Taylor announced today that he is supporting Rep. Ken Paxton for Texas Speaker of the House.  The other person who have filed to become Texas Speaker are Rep. Warren Chisum, and the incumbent Texas Speaker, Joe Straus.

“The Speaker of the House of Representatives is one of the most powerful and influential political figures in the state, vested with the responsibility of overseeing the course of lawmaking in every area of possible interest to any Texan.”   Texas Federal Court Judge, Lee Yeakel.

What are the actual powers and duties of the Texas Speaker of the House?  Click here.

Sign the letter to support a conservative for Texas Speaker. http://conservativespeakermandate.com/

Here is the statement we released yesterday.

The hearing was officially posted as a public hearing, but Committee Chair Chuck Hopson (appointed by Straus) announced that he would close the hearing and ultimately only allowed the public to hear ten minutes of committee discussions that lasted more than three house behind closed doors.

“It is outrageous that the public and media were effectively shut out from hearing important details about alleged threats related to the Texas Speaker of the House race made by an elected official and member of the Straus leadership team. “

“With Rep. Hopson’s anti-free speech letter last week and his near-shutout of the public today, the chairman appears dead set on hiding relevant information from Texas voters about speaker politics.”

Chairman Hopson (appointed by Speaker Joe Straus) concludes not enough information at this time to make any decision about misconduct.  Hearing adjourns.

Rep. Hughes stated to the press that he called Rep. Phillips before he sent out his letter with such allegations in question.  See Hughes letter below.

Rep. Larry Phillips was named as the Texas House member that Rep. Bryan Hughes said called him and discussed how a redistricting map was already being drawn to get rid of Republicans Rep. Erwin Cain and Rep. Dan Flynn as punishment for not supporting Joe Straus for Speaker, but that Rep. Hughes would be safe as long as he supported Straus.

See the letter here with Hughes’ detailed description of the call between he and Rep. Larry Phillips.  BryanHughesWithdrawsSupportFor Straus

Chairman Hopson (apppointed by Straus) made some important annoucements:

1. Rep. Larry Phillips has recused himself from the committee hearing, as he is a member of this committee that is conducting the investigation.

2. The hearing would limited to the one purpose, the allegations made in Rep. Hughes’ letter.  I assume this means the Rep. Hopson has backed off his efforts to investigate people’s free speech activities, who dared give their opinion about the Texas Speaker of the House race.  We’ll see.  Hearing is technically not over yet.

3. The hearing would take place in private, and the public and media would be shut out of the important discussions between Rep. Phillips, Rep. Hughes, and the House committee.

See our letter here, expressing our concerns about Rep. Hopson’s negative statements about speech by private citizens in the Texas Speaker race.  https://texaslegislativeupdate.files.wordpress.com/2010/11/ltr-to-tx-house-of-representatives1.pdf

We are still in the hearing room and we await the return of the committee members and Rep. Hughes from Chairman Hopson’s closed session.

Add six (6) more names to the list of House member and members-elect who have now decided to vote against Speaker Joe Straus and are now supporting Rep. Ken Paxton.

Today, Liberty Institute delivered a letter to all the Texas State House of Representatives members and members-elect explaining their legal right to communicate with their constituents on the Speaker of the House race. On Monday, Rep. Hopson sent a letter telling House members they could be breaking the law and risking jail time if “influence[d]” by their constituents on who the next the Texas Speaker should be.

“We fought a lawsuit over this very issue and won,” said Kelly Shackelford, president/CEO of Liberty Institute. “Vague threats to try to intimidate Legislators and Texas citizens are baseless and won’t work.”

Liberty Institute’s letter states, “…the law is clear. Citizens, organizations, corporations, and legislators enjoy broad protection to discuss who shall be selected as Speaker. Any attempt to chill that constitutionally protected speech is illegal.”

Denial of Voting Rights on State Board of Education:

Tell your Texas House member that you want a conservative Texas Speaker of the House.  Contact information is here. http://capwiz.com/libertyinstitute/state/main/?state=TX&view=myofficials

Sign the letter asking for a conservative Texas Speaker of the House.  www.conservativespeakermandate.com

We’ve said from the beginning to State House members, when it comes to the Texas Speaker of the House issue, listen to the voters, to your constituents.  Texas voters delivered a victory at the polls for conservatives.  That’s what they expect for the leader of the Texas House, as well.

Have you told your State House member that you want a conservative for Texas Speaker of the House? Click here to make contact. http://capwiz.com/libertyinstitute/state/main/?state=TX&view=myofficials

We have also heard that another Republican House member said the pledge to Straus was still intact, but when this member was asked if pledge means an actual vote for Straus, the response was-“I will listen to my constituents.

Yet another member is also listening to the people, and that is Republican State House member, Ken Paxton, who made it official today:  he’s running for Texas Speaker of the House.   Add Paxton to the growing list of House members who were on the support list for Straus, that Straus released last week within hours of a historic Republican resurgence in the Texas House, gaining over 20 additional seats.  Just yesterday, Rep. Bryan Hughes pulled his pledge from Straus, following Rep. Debbie Riddle, who last week asked that her name be removed from the Straus support list.

Courtesy of the Texas Conservative Coalition website: “State Representative Ken Paxton was elected to the Texas House of Representatives in 2002 and is currently serving his 4th term representing district 70.  Ken Paxton received his BA and MBA from Baylor University.  Representative Paxton also earned a law degree from the University of Virginia Law School in 1991. He and his family live in McKinney, Texas.  Rep. Ken Paxton has fought tirelessly against property taxes.  He authored and passed HB 1038, requiring county chief appraisers when determining the market value of a residence homestead to not exclude from consideration the values of other property in the neighborhood that sold at foreclosure or that declined in value because of the economy.”

He was elected to his fifth term in November of 2010.

He is well known as a solid, fiscal and social conservative.  See his full release letter here.  Ken Paxton is at the very top of legislative scorecards for actual legislative votes as tallied by numerous leading conservative organizations in Texas. His annoucement includes the message that we have been saying, the voters want conservative leadership and they want their elected representatives to listen. Ken Paxton Speaker Announcement

Republican, and incoming freshman Texas State House member-elect, David Simpson says he is will “support best man for the job.”  This is according to an article linked here.  According to this srticle, Simpson is “leaning” toward Chisum. 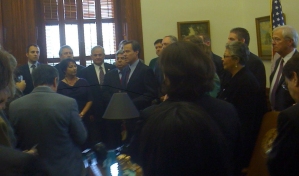 Any list of names that Straus shows as proof of support should be vigorously questioned.  I have alread talked to numerous members who have said that such list was not recent and was before the election results.  All that has changed, now that Republicans have as many a 99 seats in the Texas House. ClaimedSpeakerSupportList

Last year in the Texas House, the current Speaker of the House, was no friend to pro-family issues.  The ultrasound bill never got a vote on the House floor, and the Choose Life license plate never received a regular committee hearing, as it was controlled by Democrat, Joe Pickett, who was appointed by Speaker Straus.  Conservatives also had to fight against a dangerous bill attacking the State Board of Education for its decisions on curriculum and textbooks issues, which missed passing by only 2 votes!

The current Texas Speaker of the House been given money from Planned Parenthood in the past and has made it known, he’s no friend to pro-family issues and he’s also considering taking away your right to vote on the State Board of Education members! http://startelegram.typepad.com/politex/2009/03/straus-look-at-changing-state-school-board-electionsmaybe-more.html

Who does your State Representative support for Texas Speaker of the House?  Call them today!!  http://www.house.state.tx.us/members/?session=81